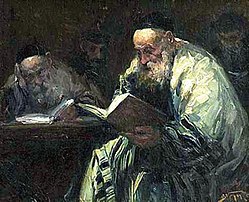 Y'all know what the Midrash is, yes?

We think maybe someone oughta see this....So we're telling you, in the expectation that someone out there in the bloggernacle will want to pursue it.

Perusing Sacred-Texts.com, and reading in the Judaism section from Tales and Maxims from the Midrash, we ran across this:


"The 'four carpenters' to whom the prophet [Zechariah] also refers, are Elijah, Melchizedek, the Messiah of war, called by some Messiah son of Joseph, and the true Messiah. These Messiahs are referred to in the 32nd chapter of Isaiah, and their existence is constantly mentioned. Seven or eight Messiahs are sometimes said to be promised in the words of the Prophet Micah (5. 5), 'Then shall we raise against him seven shepherds and eight principal men,' but it is held that there will be but four (Zech. 1. 20), and these are they: Elijah the Tishbite, an unnamed man of the tribe of Manasseh, Messiah of war--an Ephraimite, and Messiah the Great, the descendant of David.--Midr. Song of Songs 2."

If we're reading that right, the five most significant prophets are Jesus Christ, Elijah, Melchizedek, Joseph son of Joseph (an Ephraimite), and an unnamed Manassehite.

Are we radically off base?