Come Listen to a Story 'bout a Man named Bruce 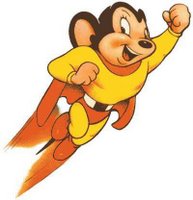 Back in the day, when The Practical Mormon was just a wee BYU student who relied on a weekly paycheck from the Daily Herald to keep us in Top Raman, we thought to attend a 14-stake student fireside that ended up having far-reaching consequences.

Inveterate note-takers, us, we came with pen and notepad in hand, and scribbled furiously as Elder Bruce Redd McConkie delivered his now-infamous "Seven Deadly Heresies" speech.
You might be familiar with the speech because of its controversial positions on the progression of God, progression between kingdoms, and the irreconcilability of evolution and religion.

If so, you'll find the remainder of our tale amusing...Ironic, even.

When we arrived at work the following day, ready to wax galleys and slice tips off our fingers in the page comp department, the newsroom was in a panic. Apparently, rumors had spread that Elder McConkie's speech had been controversial...and the editors hadn't sent a reporter to cover it.

We'd read our share of comix. We threw on our cape, removed our eyeglasses, and volunteered to write the story. (Or did we remove the cape and don the eyeglasses? Never mind.) The Herald got its story (scooping both the Deseret News and the Trib), and the next day, the phone calls started.

Was it evolution that prompted our readers to call? Adam/God? Naaah.

The phone calls were coming from nearly every Protestant minister in Utah County, each of whom was demanding equal time to rebut Elder McConkie's assertion that man can't be "saved by some kind of lip service."

It was a terrific row! Editors were arguing with ministers; a delegation of clerics even threatened to storm the newsroom. There was name-calling, a threatened lawsuit (as though we had some legal equal-time obligation), and a flury of letters to the editor (quite an accomplishment in a pre-email world).

In short order, your hero, the Practical Mormon, got promoted out of the back shop into the newsroom as the Herald's Religion Editor. For which we'll always remember Elder McConkie in a favorable light.