A Socratic Dialogue for Believing Saints
The Morabbi asks: Do you believe in a literal Adam and Eve?

To which the Uncertain Believer responds: I'm not sure.

M: Shall we consider the matter?

M: Let us find out first whether we share common ground. Do you believe in God?

UB: Yes, I definitely believe in God. I've had spiritual experiences, and I've heard God's voice and felt the presence of the Spirit in my life.

M: What do you believe about God?

UB: That He...They...It...She...OK, He -- I'll say He -- is good. And that He loves us. And that we are His children. In fact, I believe that we lived with Him before we came to this earth, and that our spirits are literally His crowning creation -- maybe even His literal spiritual offspring.

M: You hesitated at first. Do you believe God is a He?

I guess I also believe that the Hebrew term Elohim means a council -- a plurality -- of Gods, amongst whom there are certainly Goddesses. But that this council is absolutely united -- One -- just as the Church is counselled to be "one," and married people are counselled to become "one."

So He/They/It/She -- it all applies. Jesus is God. The Holy Spirit is God. The Father is God. The Elohim -- the council -- is God. But since Jesus -- the God of this world -- counselled us to pray to the Father, I comply and say "He" when I discuss God.

M: Then we're on common ground so far. Let's move along. Do you believe that God -- whether alone or in concert with others -- created this earth?

M: Would you agree, though, that even if it came about through natural means, those means arose under the direction of God?

UB: As a believing Saint, I'll stipulate to that. I believe God organized the earth and all of the universe -- but I'm uncertain about how or when it happened.

M: Excellent. Then we're still on the same page. Do you likewise believe that there is a plan, whereby all of God's children -- you, me and all the rest of us -- come to this earth, gain bodies, and learn to live by faith? And that there was a Savior who atoned for our sins so that we can live in the presence of God for eternity?

M: By the way, does the Savior have a title?

UB: Oh, Yes. I know this one! He's Y'shua Mashiach -- the redeemer, the annointed one. Most of the Old Testament refers to him by those specific names -- which names in English we render as Jesus Christ.

M: OK, back to the basic Mormonism. Would you also agree that Jesus is the Firstborn of God -- not just the only Begotten son of God, but also His firstborn of the Spirit?

UB: As a believing Saint, I'll stipulate to that. Nearly every book of scripture uses the term Firstborn to describe either the literal Christ, or some individual who is a type of Christ. The firstborn lamb is sacrificed in the temple...I could go on.

M: Then we can agree that Christ is the firstborn...and that by extension the rest of us are the later-born?

UB: No argument there.

M: And that there was a grand council of all the spirits before this world began -- a council in which you and I were participants? And in which every spirit who would come to this earth assented to a particular plan of salvation?

M: So we have a finite number of spirits assigned to this world?

UB: Yup. There's a firstborn. And if every spirit attended the same council there must be a lastborn. So there's a finite number.

M: And would you agree that the plan called for each of those assenting spirits to experience mortality in an earthly body?

M: Then which of those finite number of spirits was the first to be placed into a human body?

M: Do you know that person's title?

M: Perhaps that title is Adam? And perhaps the first female spirit to be placed into a human body has the title of Eve?

UB: Well I guess you can assign any title you want to the FIRST people.

M: And does it matter to our relationship with God whether the bodies they inhabited were created from monkeys or from dirt?

UB: Matter? Was that a pun? No, I suppose it doesn't matter. As spiritual beings, we are not our bodies. Our bodies are merely tabernacles for our spirits.

M: So we don't disagree about Adam and Eve?

--The Morabbi, your friendly neighborhood Practical Mormon.
at 10:57 AM No comments:

Pour, pour poor BCC (The Picky Grammarian seizes upon bullet-point #3). Today's picky grammar lesson is this: You don't pour over paper. Didn't your mother teach you anything? (wink) You may pour over the sink, but you may only pore over paper.

Now use a napkin to wipe that smirk off your face -- as you versez pour pauvre BCC.
at 8:53 PM No comments: 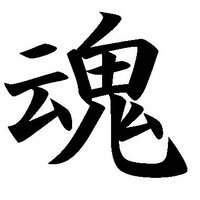 If we accept the premise of 1 Nephi 33-34, and of Alma 11:37, which is that no unclean thing can enter the kingdom of God, and the premise of Alma 7:21, which is that the Spirit does not dwell in unholy temples, then the measure of personal spirituality is certain. If you're having spiritual experiences, your personal spirituality is acceptable to the Lord. And you're on track to dwell in the Celestial Kingdom.

If you're NOT having spiritual experiences, you need to clean up your life so as to allow the Spirit to dwell with you again.